AmCham’s Virtual Business Forum with State Secretary László György of the Ministry of Innovation of Technology featured an assessment of the current state of the economy, the government’s response to the first wave of the pandemic and how innovation policy was affected by the COVID crisis.

Undoubtedly, automotive and tourism were the two sectors of the Hungarian economy most affected by the lockdown. Automotive has since recovered, though, and it’s back to previous highs with the potential to trigger a positive domino effect. However, foreign tourism won’t recover until a vaccine is available.

The labor market suffered far less than in many other countries, György said. In August, some 4.5 million Hungarians were working, only 20,000 less than the record number ever employed in the country. In fact, some companies even reported a labor shortage that left some growth potential untapped. 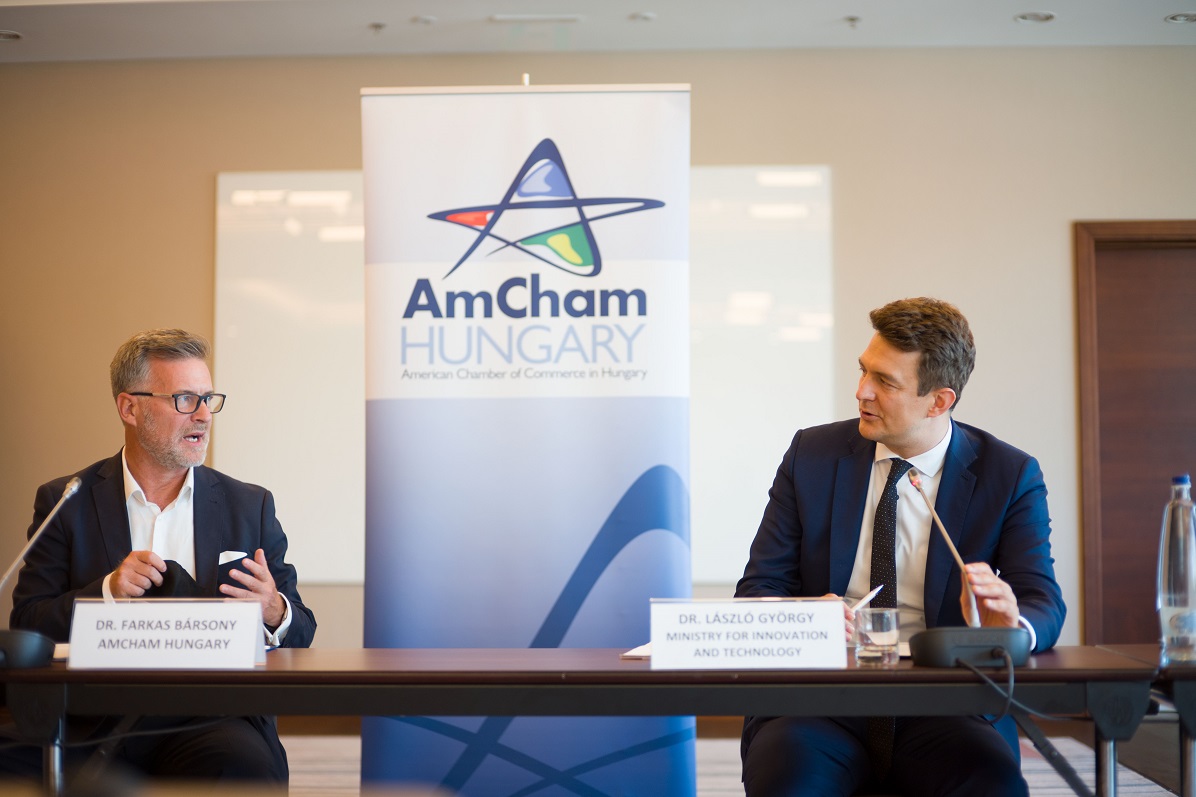 In the medium run, the overall perspectives of the world economy look rather grim with growth to go down due to government debts. Simultaneously, supply chain structures will change.

“As production will move closer to consumers, that’s a big chance for the CEE region. V4 countries will have a chance to increase their value added,” said György alluding to the Visegrád group of Czech Republic, Hungary, Poland and Slovakia. The state secretary added that the biggest danger in the short-term is if lockdowns are reintroduced.

“We are an open economy, 90% of GDP is export-driven, so lockdowns on export markets would make us suffer,” he said expressing hope that not all countries are interested in such drastic restrictions. And if trust is back, so is consumption, which in turn helps the growth curve take an upwards tick. The medium-term is a lot rosier. The 2021-2027 EU programming period foresees unprecedented resources for SMEs and large corporations alike.

As far as adaptation to the COVID crisis is concerned, AmCham recommended an expansion of remote work, an item that has been on the agenda for years now. György assured AmCham members that they would continue to be part of the legislative process. With many details pending, partial telework will be allowed, there will be less administration, costs will be accounted on a lump-sum basis, and employers will be granted online-based work control rights. 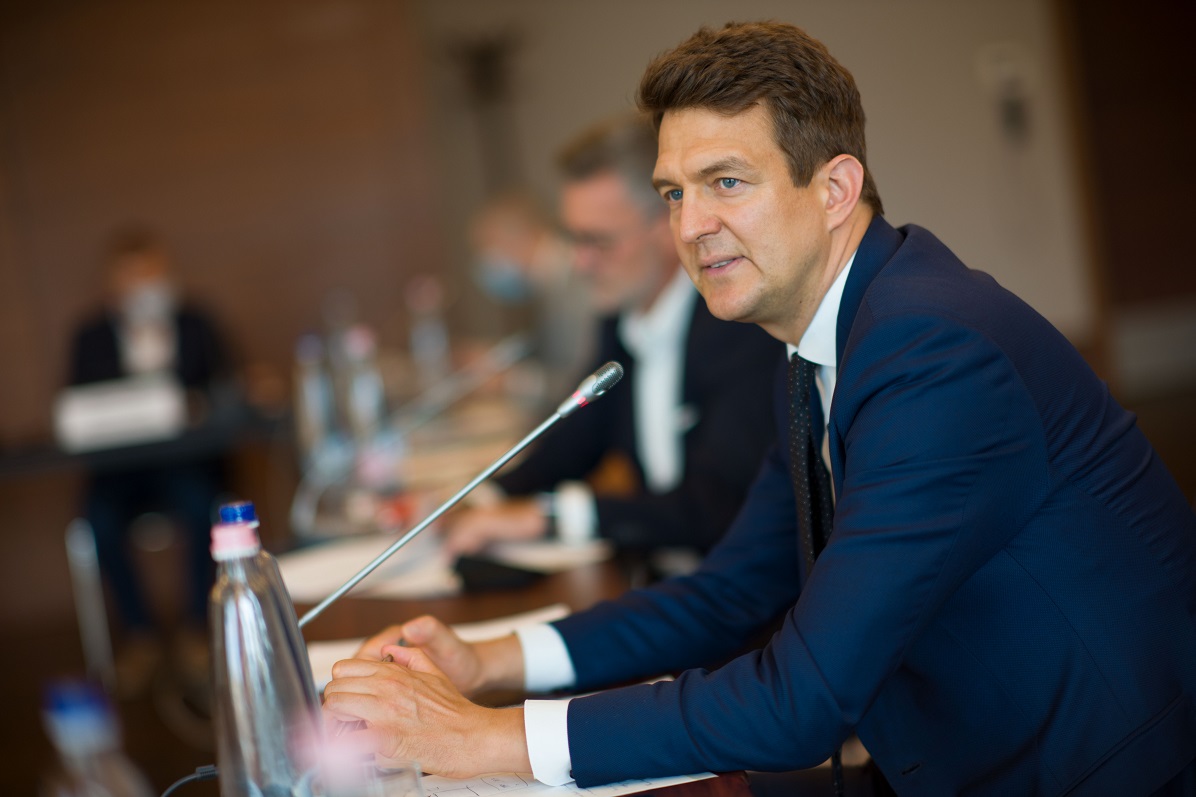 The state secretary addressed the issue of adult training due to concerns over a renewed regulation effective as of September 1 that, it is feared, will put an extra administrative burden on employers by requiring them to upload related data into a central data base.

The idea, however, is to create a comprehensive system for adult and vocational training programs that will give feedback about their efficiency. This way if patterns point to higher wages and more workplace stability, government subsidies can be tailored accordingly, explained György.

When it came to job protection, the government decided to follow a unique approach to the COVID-19 crisis. “We looked at it as an opportunity early on,” said György. “We spent 10 times more on CapEx subsidies than direct job protection measures because we want to safeguard jobs via investments.”

Not surprisingly, innovation policy was also affected by the pandemic. An initial COVID research fund of HUF 3 bln was twinned with a HUF 7 bln fund to finance related innovative projects. Part of the funds are funneled into local COVID-19 vaccine development. COVID-neutral programs include cooperative PhD programs that move universities closer to markets. A new management model should allow them to deepen cooperation with companies with less stringent procurement rules. In addition, university professors won’t be public servants, in order to attract talent, and PhD programs will be brought closer to practical knowledge.

“Our intent is to say goodbye to the so-called ivory tower concept; we’d rather move towards the Anglo-Saxon model that builds on vibrant cooperation between universities and the corporate world,” said the state secretary, urging AmCham members to be proactive and turn to HIPA or the ministry with any ideas or questions regarding their operations. 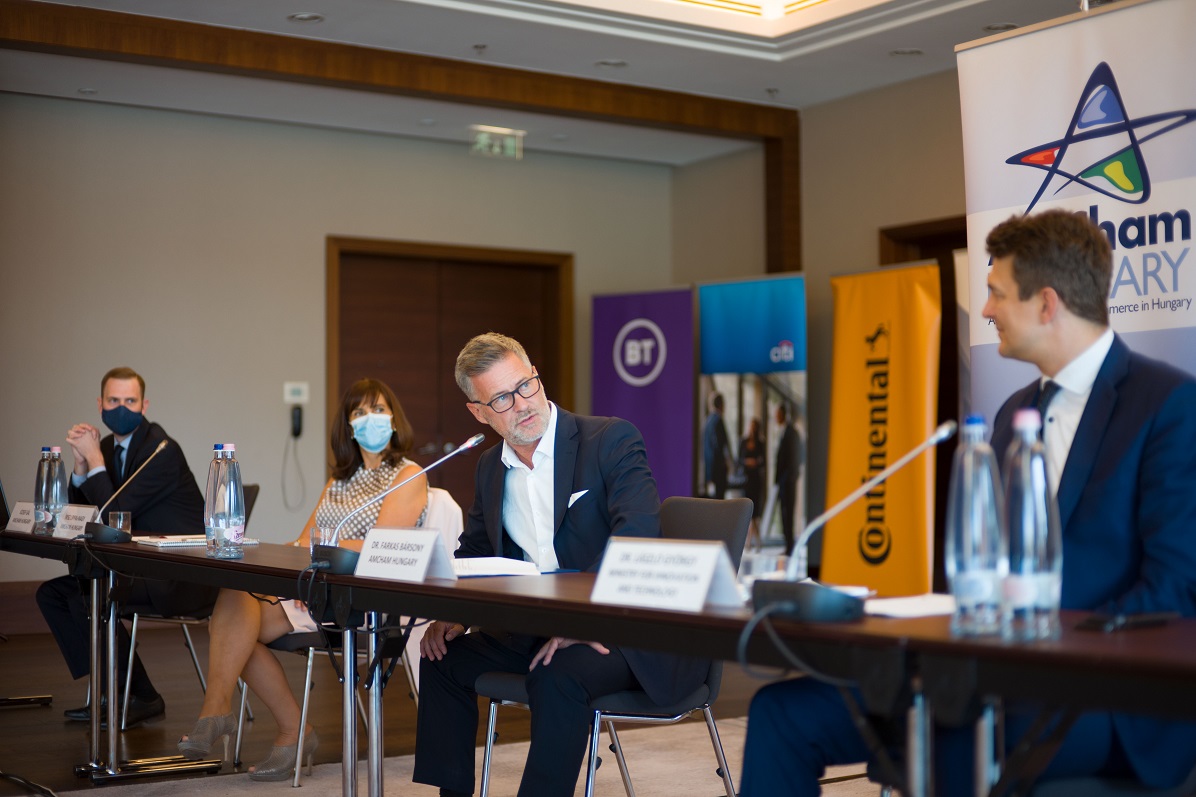 The government is also dedicated to expanding its Modern Factory Program. VALI, the main Information Portal for Businesses will serve as a key platform by offering state-of-the-art solutions and providers broken down by area of specialization and geography to increase overall competitiveness.

The health industry will be treated with priority as it receives the biggest investment subsidies from among the sectors. A total of HUF 85 bln has been earmarked for that purpose, from which HUF 50 mln is contracted out by the Ministry of Finance, with the rest managed by the innovation ministry. Simultaneously, a Health Innovation Agency has been set up to foster the local value-added health industry, added György.

AmCham would like to thank BT, Citi, Continental Automotive Hungary and Philip Morris for supporting the event.

A version of this article will appear in the Budapest Business Journal of October 2, 2020.