Lessons learned from the COVID-19 outbreak and the response, as well as an assessment of the priorities of the new normal; these were the main topics of the sixth edition of the Business Meets Government Summit, organized by AmCham Hungary in association with the Hungarian Investment Promotion Agency.

In his keynote speech, Minister of Finance Mihály Varga described the economic fundamentals of the Hungarian economy as strong. These made the economy much more resistant to the current crisis than in 2008, he said. To begin with, last year, the economy had expanded by 4.6%, compared to only 1.1% in 2008. During the first quarter of this year, when the crisis had already begun to impact the economy, Hungary not only succeeded in maintaining its growth surplus, but was even able to increase it, Varga noted.

On the negative side, “Our strengths have become our weaknesses throughout the crisis; certain factors have hit Hungary’s economy particularly hard. For example, the boom of the tourist sector achieved a low point in April. Another sector is the automotive industry, which was already facing a technological challenge before the crisis,” Varga said. 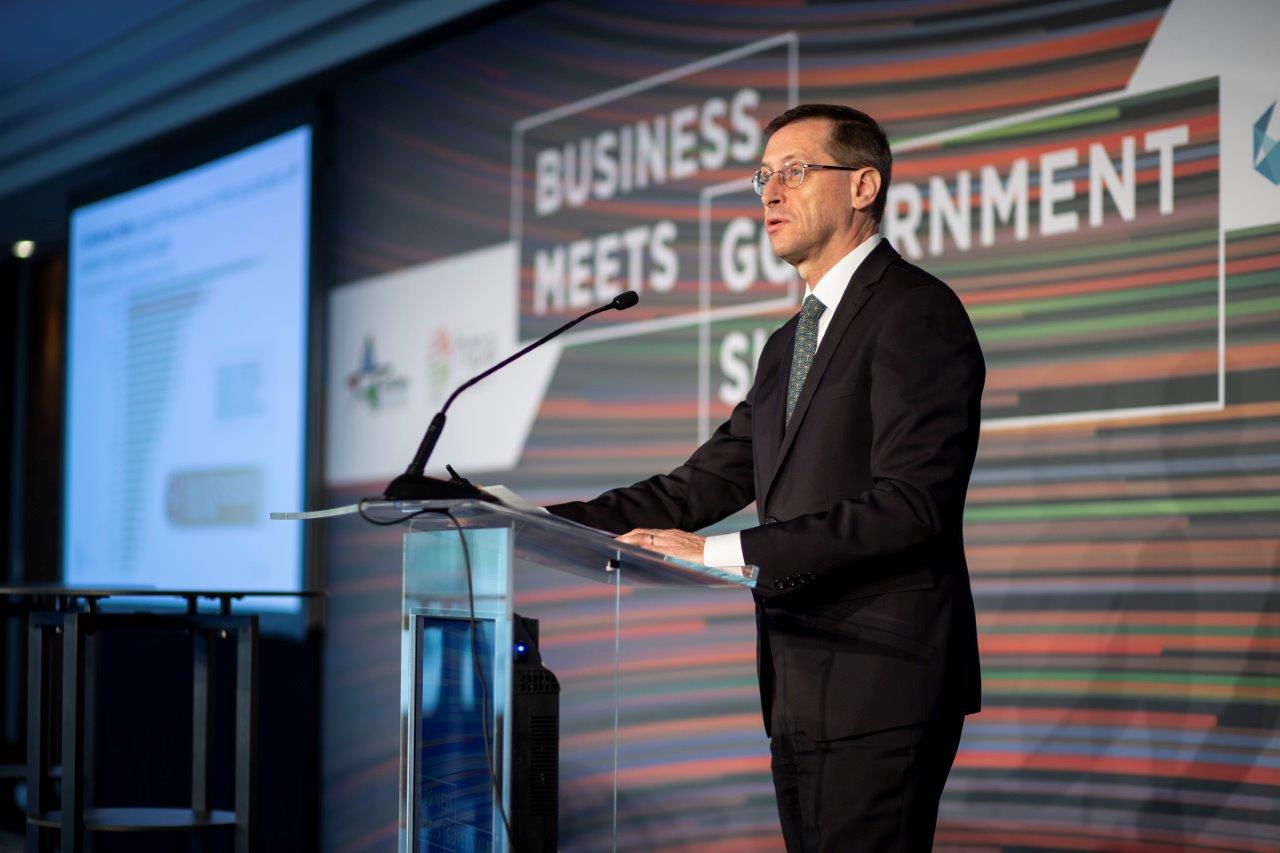 To contain these issues, immediate fiscal and monetary measures were taken. “The measures of the government and of the National Bank [of Hungary] constitute the largest ever economic package, which minimized the job losses and ensured new jobs. The measures together reallocated 20% of our GDP, ensuring Hungary’s rapid return to a dynamic growth trajectory,” Varga explained.

As a result of the economic protection action plan, the measures curbed the GDP downturn by 3-4%, according to ministry calculations. Measures included preserving jobs, wage support, online training, tax relief and administrative burden reduction, as well as job protection by supporting corporate investments, training and education support. After a significant decline, retail sales and the automotive industry are recovering, the finance minister said. From April and May on, a slight recovery started.

“The wage subsidy scheme aimed at limiting the negative impact of the first wave of the pandemic. More than 900,000 workers benefitted. The key elements of this program were job protection, student loans, [and] adult education. The government promoted the protection of jobs with targeted tax benefits as well, leaving HUF 400 billion in the economy,” the minister explained.

“The job protection measures can be regarded as successful; by August employment was reaching the 2019 level, with more than 4.5 million working. In the future, we will focus on job creation and investment promoting forms of support,” Varga added.

As for the near future, the second wave of the pandemic might result in a “W” shaped or prolonged recovery in the Hungarian economy. In the first half of the year, Hungary overcame the lowest point of the crisis and is recovering but it is important that this recovery is as rapid as possible. The signs to this end are promising, the minister said.

“Hungary’s geographical location, its favorable tax system and outstanding infrastructure may be an excellent target for foreign investments. This is also reflected in the fact that Moody’s improved Hungary’s rating from stable to positive. It was a good sign from the business community for the business people,” Varga noted.

In terms of the bilateral cooperation between Hungary and the United States, America is the most important export partner outside the EU;, it is also the largest non-EU investor in Hungary. “The stock of investments from the U.S. reached EUR 11.6 billion in 2018 and there is still room for improvement,” Varga said. 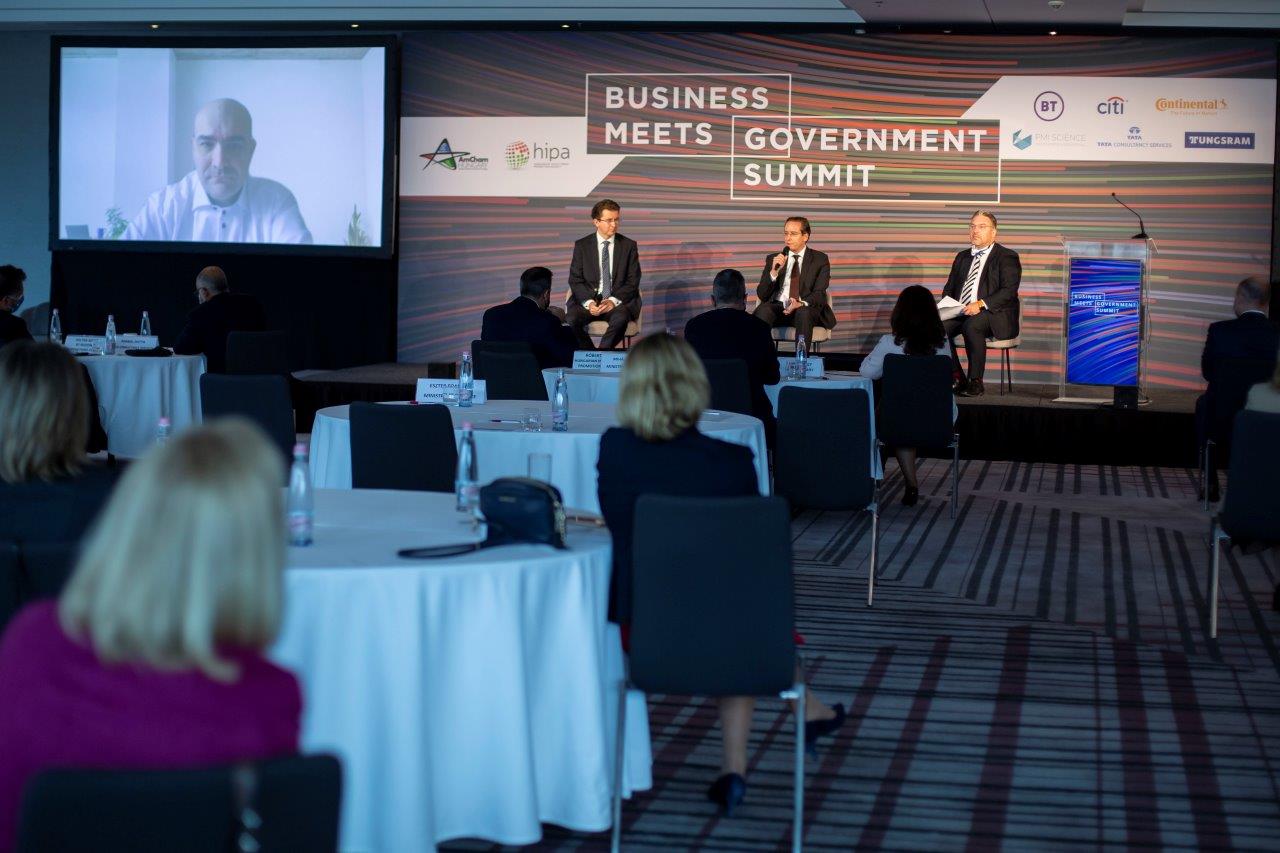 In the second section of the summit, government officials and managers discussed the focal points of countering the negative effects of the second wave of the COVID-19 pandemic. In order to overcome this, a very close cooperation will be needed between companies and the government. Innovation will have a leading role in the development, as the world is transforming and adaptation to the new environment is based on innovation.

Besides this, two crucial aspects must be carefully addressed: the use of EU funds and providing a competitive labor force, the summit heard. In the Business Environment section, Róbert Ésik, CEO of HIPA, outlined the priorities for containing the setbacks of the second wave. These are: financing investments, both domestic and foreign, financing the fight against job losses, and taking advantage of the opportunities raised by the crisis, for example the shortening supply chains.

Ésik added that the outlook for Q4 is promising. As for further measures for improving the economy, the government is looking at a new version of a training subsidy program, which will soon be announced. 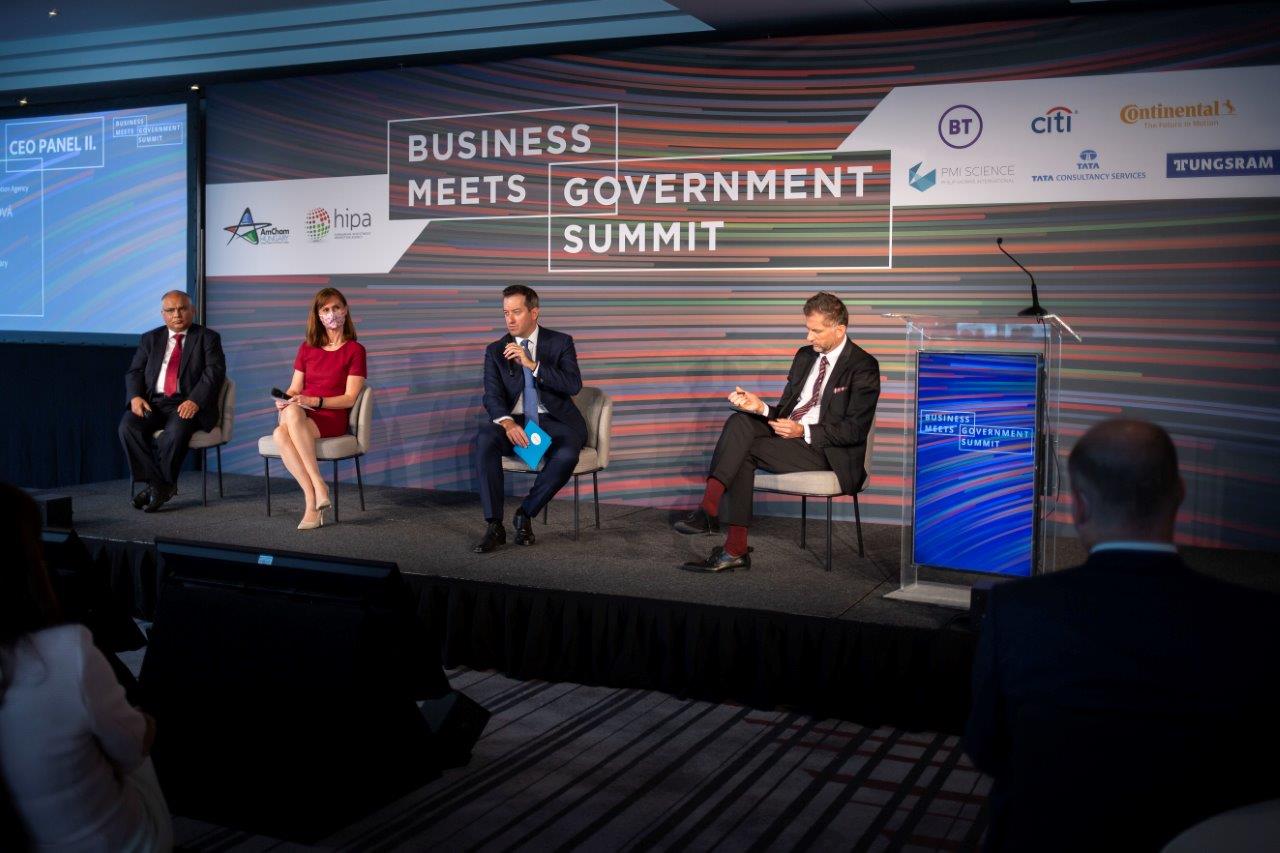 AmCham would like to thank our partners, BT, Citi, Continental Automotive, Philip Morris International, Tata Consultancy Services and Tungsram for supporting the conference.