Put COVID to one side; forget, if you can, the tragedy unfolding in Ukraine. You are left with what we used to call “business as usual,” when all the corporate world had to worry about was the existential threat posed by climate change.

That was the world the American Chamber of Commerce in Hungary had in mind when it planned “Journey to Zero,” its first sustainability conference, long before the war became a reality. At one point in the day, AmCham CEO Írisz Lippai-Nagy summed up the nature of a voyage we have all been on.

“When I joined AmCham eight years ago, sustainability wasn’t even on our agenda. It was a year and a half ago that some of you, our members, started to ask us questions about this. And here we are at our first sustainability conference.” 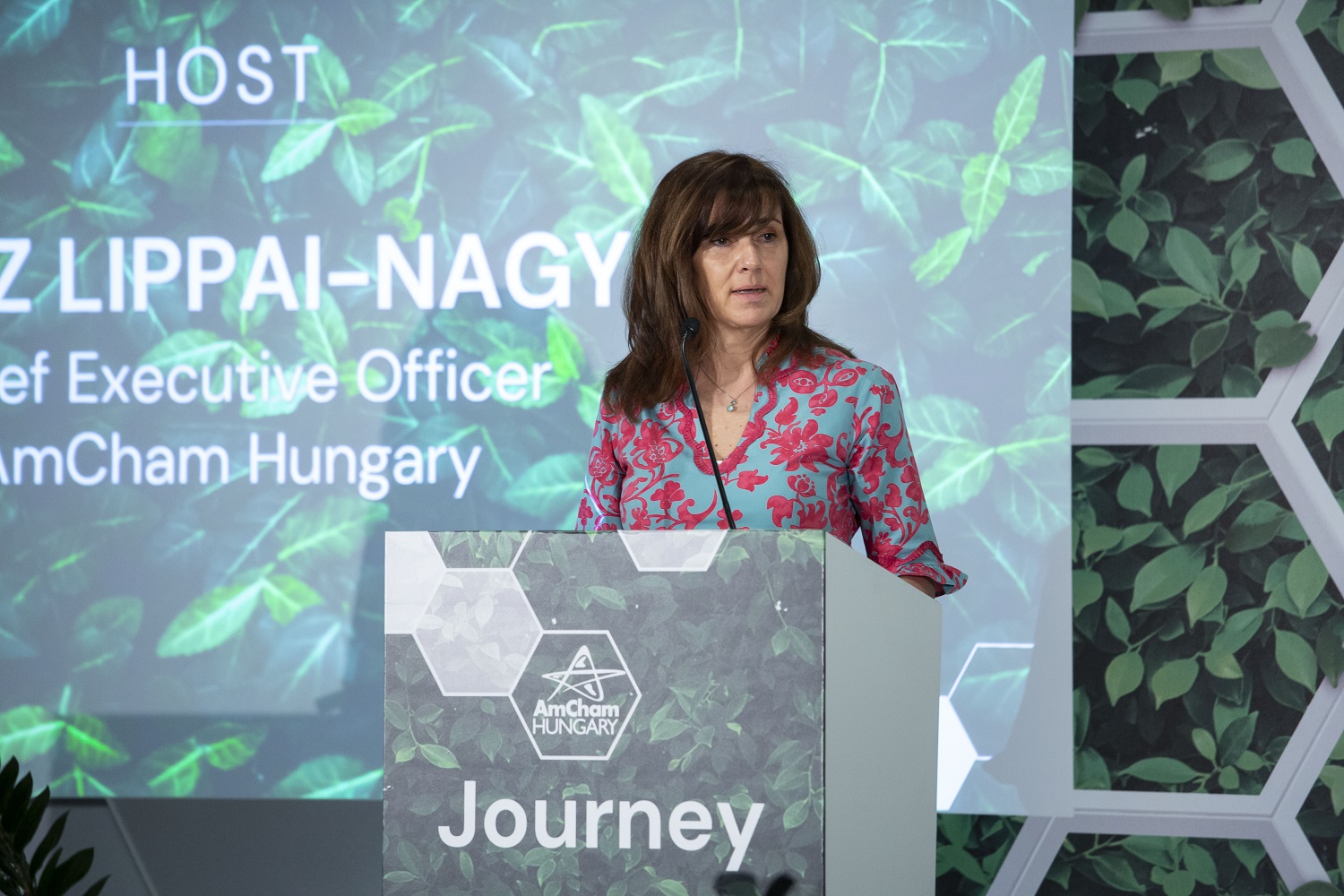 The summit, held at the Kempinski Hotel Corvinus Budapest, featured speeches, moderated discussions, inspiring stories and breakout sessions. Gábor Baranyai, Deputy Permanent Representative and Hungary’s Ambassador to the EU, gave the keynote speech. That was followed by what many judged to be one of the highlights of the day.

This was a discussion with Martin Porter, executive chair of the Cambridge Institute for Sustainability Leadership in Brussels, expert advisor to the European Commission’s Horizon 2020 on climate and resource issues, and senior strategic adviser to CLG Europe. Opposite him was Claudia Patricolo, editor-in-chief of CEE Energy News, who began her journalistic career in Hungary as an intern at the Budapest Business Journal.

Answering a question from the floor towards the end of this session, Porter made the point that while „it is only natural that the focus is on Ukraine right now,” the drive for a more sustainable future cannot be put on hold.

“Climate must remain our North Star,” he said. “Strategically, it makes no sense for it not to.” He said he was cheered by how climate change remained forefront throughout the pandemic. Putting action off was not an option, he argued. “It just becomes more expensive and much worse.”

A discussion on the country impacts arising from the EU’s “Fit For 55” package (which refers to the EU’s measures for reducing net greenhouse gas emissions by at least 55% by 2030) might well have been the most engaging session, if only because it included dissenting (if politely expressed) opinions.

Moderated by Thomas Narbeshuber, vice president for Central and Southeast Europe at BASF, the panelists were: Barbara Botos, Deputy State for Climate Policy at the Ministry for Innovation and Technology; István Bart, founder and director of the Climate Strategy Institute 2050; Endre Ascsillán, CEO and vice president of GE Global; and Antonella Sopranzetti, EU Affairs manager at ExxonMobil.

While Bart praised the steps the government had made, he was critical that they did not go far enough. “We have a national climate law, but that is just five paragraphs; it does not have any serious steps.”

He described government communication on net-zero as a “thought experiment: very interesting, but there is no power. What the government requires from itself and people to achieve it is not there.”

But he also said the companies represented in the conference room were “complicit” in not doing more with their economic power to push the government to move faster and further.

A series of inspiring “Sustainability Stories” were presented in TED-talk style. Joerg Bauer, president & CEO of Tungsram, talked about defeating world hunger by creating “circular food hubs” from verticle indoor farms. Liz Madaras, founder & CEO of Poliloop, described how her team worked to find bacteria that can break down polymers. Managing director and global head of ESG research and development at MSCI Oliver Marchand explained how his former startup used data science to accurately map carbon footprinting and measure carbon risk in “climate investing.” Christopher Mattheisen, managing director of Microsoft Hungary (speaking, as he joked, without the benefit of a PowerPoint presentation), described how the software and cloud services firm “provides the plumbing for AI” to help with everything from dealing with wastewater to monitoring prehistoric wild horse herds.

The afternoon was rounded out with four breakout sessions that debated the issues around clean energy, the circular economy, mobility, and sustainable financing and EU taxonomy.

AmCham Hungary would like to thank the following companies for making the event possible: 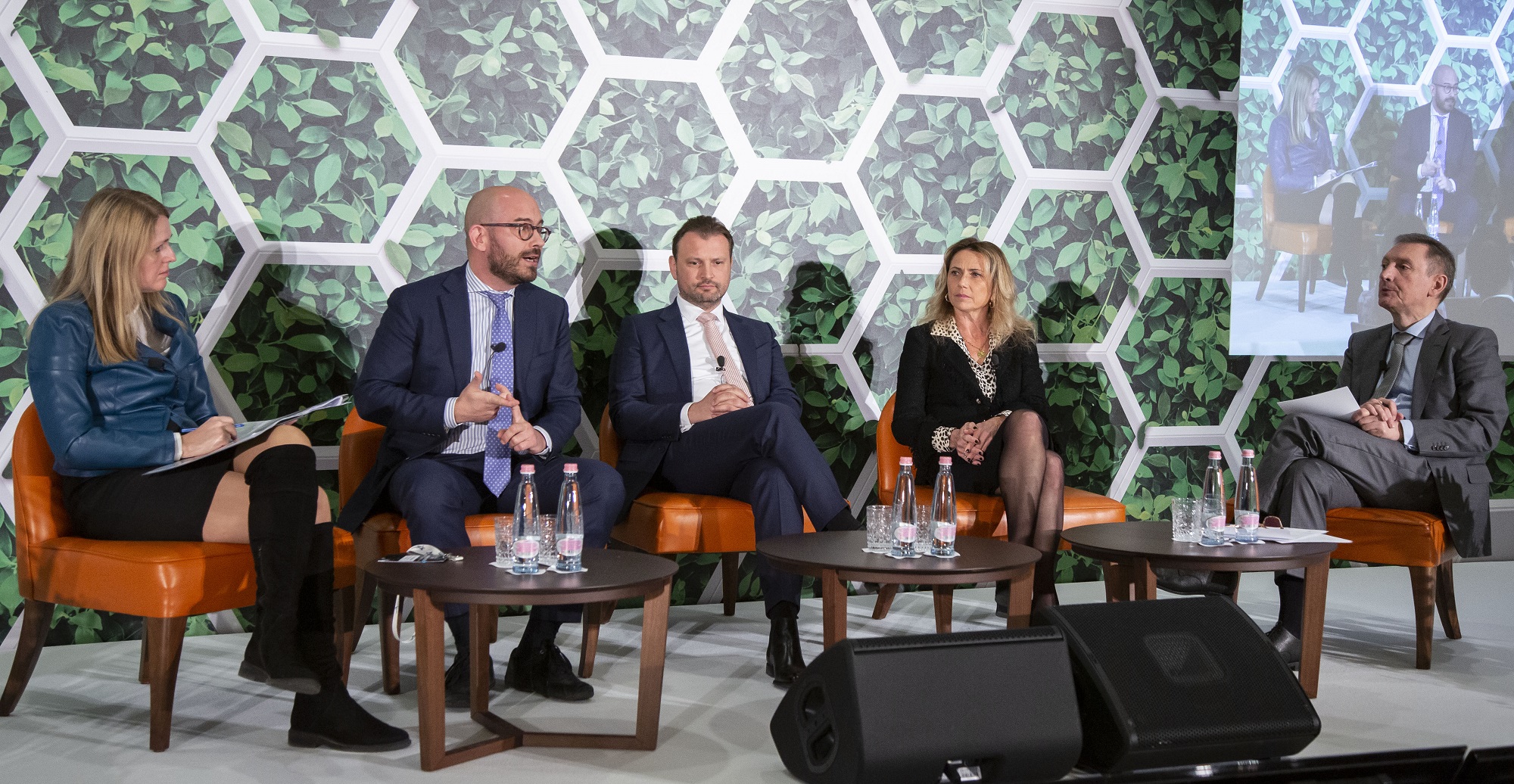